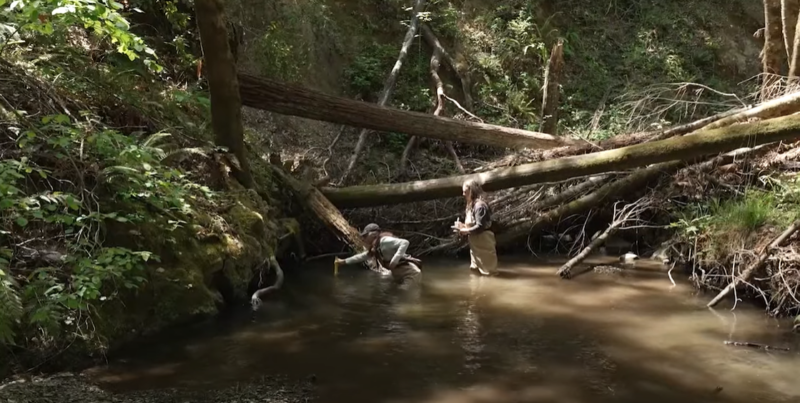 The RCD of Santa Cruz County, in partnership with the City of Santa Cruz, the San Lorenzo Valley Water District and the County of Santa Cruz and many others completed an instream habitat improvement project along approximately one mile of upper Zayante Creek. Since 1994, Zayante Creek consistently has possessed some of the highest juvenile steelhead densities among tributaries of the San Lorenzo River and is currently a priority area for coho recovery. The project reintroduced large cut trees into the creek that are anchored in place to mimic natural conditions that have been absent due to various activities over the last century. This has kicked off a process that continues to improve conditions for steelhead and coho salmon. Large wood in the stream is critical for good stream function and creates pools, refuge areas for fish to hide and reduces channel downcutting. The project designs were funded by the California Coastal Conservancy and project construction monies are from a grant by the State Water Resources Control Board and the Environmental Protection Agency. Initial monitoring assistance was provided by services members from the Americorp Watershed Steward Program.

Watch this video to learn more about the exciting project in the Santa Cruz Mountains.