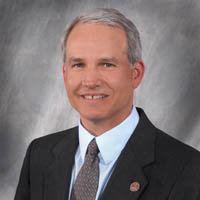 Brett Storey is currently a Senior Project Manager for Placer County and has been with them for over 13 years. His responsibilities include directing the plans and project development for all forest restoration and biomass utilization activities for the County.  In a partnership with the USFS, Placer County has created a stewardship process that allows the typical forest operations to be managed by the county to support more projects in the forest.  He is also responsible for all water and groundwater related projects analyses and has supported the Middle Fork American River Hydropower Project that supplies water and 225 MW power for Placer County and other regions since 2007.

Prior to government service he began his career with 15 years in the aerospace industry designing cockpits for military aircraft such as the B-2 bomber and F-22 tactical fighter as an engineer, manager and partner. After that, he worked as a worldwide logistics and procurement manager at Hewlett Packard for 9 years. Brett was a former three times Mayor and served on the City Council of Rocklin, CA a total of twelve years.  He also served two terms on the Rocklin Uniformed School District as a Trustee.

He graduated from California State University, Chico in 1982 with a BS in Business Administration, and he also attended graduate school at USC in Systems Engineering.