Bringing the Wildlife Crossing at Liberty Canyon to Life

The RCD of the Santa Monica Mountains has been working in collaboration with partners to bring the Wildlife Crossing at Liberty Canyon to life. The crossing would knit together two crucial habitats, which are currently split by Highway 101, and will be crucial for preventing the extinction of the native cougar population.

Although mountain lions (or cougars) in California are not endangered as a whole, sub-sets of their population in southern California face risk of extinction due to urban encroachment, vehicle strikes, inbreeding, and other risks associated with being separated by lethal traffic and freeways like Highway 101. Cougars living in the Santa Monica Mountains face a genetic diversity problem with a 99.7 percent chance of extinction in the next 50 years unless the gene pool is increased, based on a 2016 University of California, Los Angeles study. The Resource Conservation District of Santa Monica Mountains (RCDSMM) and their partners hope to fix this problem with a thoughtfully constructed and innovative wildlife crossing.

The 165-foot-wide, 200-foot-long Wildlife Crossing at Liberty Canyon will span Highway 101 and connect two major cougar habitats. Liberty Canyon was identified as an ideal location for the project after a cougar attempted to cross in October 2013. The young male would have been a prime candidate for increasing genetic diversity in the southern population. It successfully crossed eight lanes of Highway 101, but was trapped by a retaining wall, struck, and killed.

The RCD received funding from the National Wildlife Federation to design the crossing, and final plans were created by Clark Stevens, RCDSMM’s Executive Officer, who is also an architect. 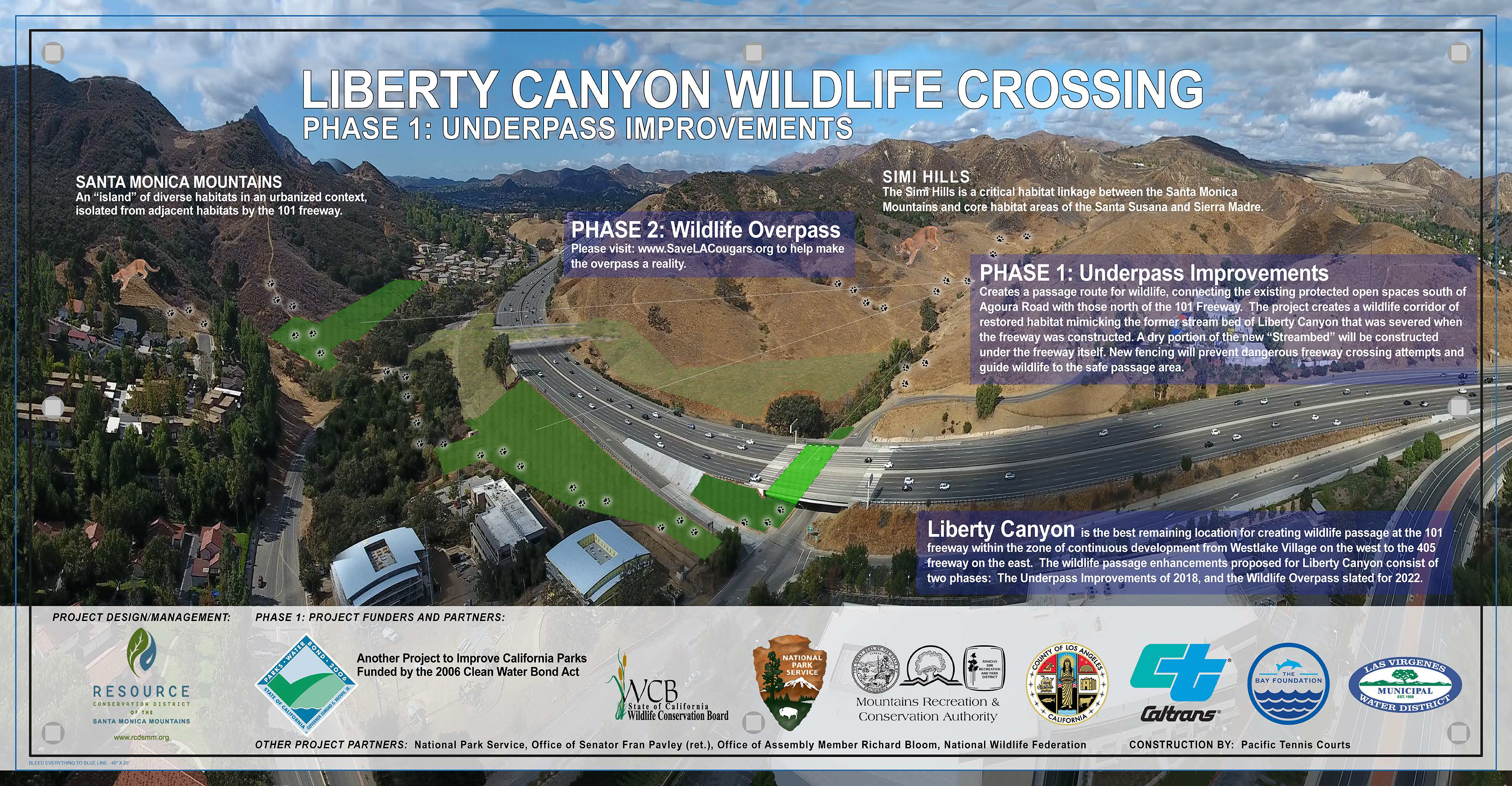 Design and illustration by Clark Stevens, Executive Officer, the RCD of the Santa Monica Mountains

The crossing is not just a bridge, but also includes a larger habitat area to promote use by wildlife. Through a separate grant from the Wildlife Conservation Board, the RCD of the Santa Monica Mountains created a habitat thread down to the crossing zone, improved a man-made drainage ditch, and added a bio swale and a long thin riparian area. The project was badly impacted by the Woolsey Fire in 2018, but the RCD is planning on restoring the habitat. In addition to cougars, there are other species that have genetic problems and will benefit from connectivity of habitats. For example, wrentits, small native birds, need continuously connected trees to travel and would benefit from restored habitat and at the crossing.

The project has many agencies involved to ensure a crossing that is durable and functional for humans, wildlife, and the landscape. Along with the RCD, lead partners include Caltrans, the National Park Service, the National Wildlife Federation, the Santa Monica Mountains Conservancy, and the Mountains Recreation and Conservation Authority.

Unlike many other communities in the United States where large predators are at odds with farming and ranching operations, the Santa Monica Mountains have little to no agriculture production and the community is largely supportive of the wildcats. A Malibu Times article stated that “in terms of written public comments received, nearly 8,000 residents have expressed support for the project, while only 15 expressed opposition.” The regional relationship with cougars truly is unique—the only other city in the world that has big cats living within city limits is Mumbai.

The Wildlife Crossing at Liberty Canyon project is still in its fundraising phase. For more information, please contact the RCD of the Santa Monica Mountains.