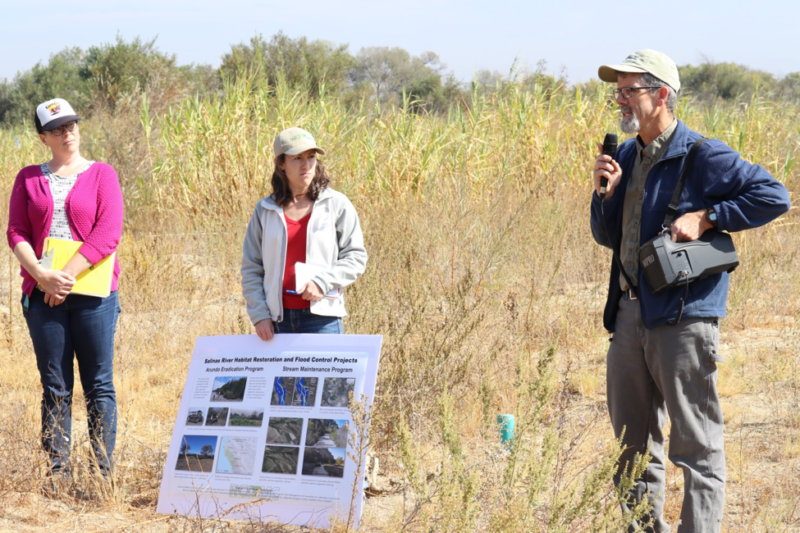 Invasive plants pose a risk to California's ecosystems and public and private lands, and Resource Conservation Districts are working tirelessly throughout the state to manage and stop their spread.

In addition to creating monocultures that outcompete native habitats, invasive weeds in California pose numerous other threats to ecosystems and people. Trinity County RCD and the RCD of Monterey County are two of the many RCDs in California that are combatting invasive weeds in their communities to restore diversity to ecosystems, reduce the risk of flood and fire, and stop their spread.

Trinity County RCD is working to control the yellow flowered dyer’s woad, and in Monterey County the RCD taking back the Salinas River from an established arundo donax infestation. Looking at these two projects side-by-side offers a glimpse of the complexity of invasive plant removal projects. Invasive plants are hardy, and treatment often takes many years before the plant is eradicated. Control methods must take into account community interests and the larger habitat. Habitats contaminated with invasive species can span many acres, and might require working with private landowners to be able to access treatment areas.

Despite the challenges in managing invasive species, it is crucial work. Invasive plants touch all aspects of conservation, and among other challenges can:

Resource conservation is a complex topic, and sometimes invasive plants perform ecosystem services or are so established within an ecosystem that removal would degrade the habitat. Rather than the goal being to eradicate all invasive plants, management must be determined on a case-by-case basis.

Invasive weed management can be roughly divided into early detection and rapid response, to prevent a population from gaining a foothold, and control and removal to manage larger populations. Weed control can look different project-by-project, but RCD of Monterey County’s vegetation management page says it will “involve the containment, reduction, or elimination of nuisance plant species… through mechanical removal, herbicide application, targeted grazing, prescribed burning, biological control, revegetation with native species, or a combinations of these methods.”

The Trinity County RCD has been working for a decade to contain dyer’s woad in the Trinity River area. “Dyer’s woad is important because it’s in the early detection and rapid response phase,” said Ian Erickson, project coordinator of vegetation management for the RCD. He explained that other weeds like scotch broom and black berry are more detrimental, but focusing on dyer’s woad is more effective because of the potential to eradicate it from the area.

Since 2009, the RCD’s crew of technicians has gone out to the site to manually destroy dyer’s woad. Due to county-wide decisions made in the 70’s, the RCD does not use herbicides as their primary tool. The implement they use is the geopick, a hand tool to dig up the plant that also uproots it, preventing regeneration. They go early in the spring—it’s a short golden hour to take advantage of when the plant is mature enough to have rosettes so staff can easily identify it, but young enough that it hasn’t yet gone to seed. Now in 2019, the site has had a 90% reduction in the total population of the 35 acre project area. The project began with Bureau of Land Management federal funds; it is now funded through the Bureau of Reclamation’s Trinity River Restoration Program.

The RCD also has projects where they will restore a landscape with native vegetation. For plantings to be successful, the young native plants need every advantage they can get. To do this, the RCD maintains a collection of local seed and stock at their nursery. Every white oak tree is not the same, and stock from Oregon will have different genetic material than one native to Northern California. Trinity County has a unique environment with higher elevation, harsher climate, and lower quality soils, so sourcing genetic material from the same “seed zone” improves their rate of success. They also sell native plants to the public. Check out their Facebook page for updates about nursery open hours.

The spread of Arundo donax follows a long line of other failed attempts to introduce an invasive species to solve a problem, only to cause another. Like iceplants, Arundo was introduced for soil stabilization. It is a tall bamboo-like plant that forms dense stands near surface water and matures to be over 30 feet tall. Arundo was originally seen as a tool to stabilize soil, but its shallow root system instead detaches rather easily as an adaptation to spread to new habitats. This tendency for Arundo to wash away creates a hazard for landowners especially during storm season, as it will bundle into raft-like structures which causes makeshift dams to form and flood surrounding properties.

To help solve this problem, among many others, the RCD of Monterey County is leading the Salinas River Watershed Invasive Non-native Plant Control Program to eradicate Arundo donax (giant cane), Tamarix (salt cedar), and other invasive species from the Salinas River riparian corridor. The ultimate goal is to exterminate Arundo on 1500 acres, and since 2014 they have treated 400 acres.

The RCD’s video (above) does an excellent job of showing the complexity of this type of project. A mosaic of farms, private landowners, renters, and state and federal lands spans the 1400 acres all along the Salinas River. The project has not only been one of weed removal, but also of community outreach, education, negotiation, and partnership with the landowners. The Program Manager, Emily Zefferman, said that people are receptive to the RCDs efforts because they see the Arundo as a hazard. Especially for farmers, flooded soils cause a food safety problem, can spread and germinate weeds, might require re-leveling their land, and delays the planting cycle because they can’t run a tractor in mud.

The RCD just received $2.9 million in funding from the Wildlife Conservation Board to continue their work. They post periodic updates on their Facebook page.